Fake Documents Exposed: Certificate of Ownership for Gold from Ghana

Here we are exposing few of the fake documents representing "Certificate of Ownership" which is usually forged to deceive foreign naive and stupid wannabe "buyers" of gold. And many people actually start believing into it. We are analyzing it here to see by logic and reason how such document cannot be a true document.

Certificate of Ownership, Gold From Ghana

In many scams involving gold sale from Ghana, the criminals will state that they have a so called "Certificate of Ownership" and will provide fake and forged documents to a naive, wannabe gold buyer, that is usually foreign, and due to their own stupidity also prone to believe that such certificate of ownership is a "proof" of gold existence.

Certificate of Ownership is a fake document.

In the laws of many countries exists something called contract law. Goods, be it gold, diamonds or any other goods, are possessed and simple possession is a proof of ownership. By signing contracts and transferring possession from one party to other party, possession of goods is transferred over and other party becomes an owner.

There is absolutely no need to issue Certificate of Ownership for gold. Further, gold, being easily malleable changes its form easily, and there is simply no document that can be connected to a piece of gold to make sure that it is what it should be. 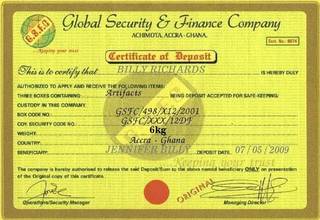 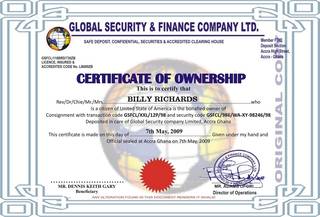 Analysis of Certificate of Ownership

Name of the company

The name of company GLOBAL SECURITY & FINANCE COMPANY LTD. itself is a self aggrandizing and pretentious sounding name. By the way global companies, do not include the word "company" itself in the name of the company.

It is up to the receiver of such fake document, to verify if the company exist or not.

Even if the company does exist, it does not mean that this type of certificate is real.

A company that is outside of the United States, simply cannot be a member FDIC.

FDIC is a Federal Deposit Insurance Corporation and insures deposits with the U.S. based banks. If a bank is not located in United States, there is no possibility to become a member FDIC.

This company GLOBAL SECURITY & FINANCE COMPANY LTD. by its own representation is neither a bank, nor U.S. based bank, nor it is U.S. based company, they represent themselves as Ghanaian company, so it cannot be a member FDIC as they are not at all connected to United States or to Federal jurisdiction of United States.

The other wordings in broken English such as safe deposit, confidential, securitie & accredited clearing house are direct indication that document is fake.

All the other codes of consignment, give the impression they are dealing with hundreds or thousands of such consignments which cannot be true.

The signatures being graphically inserted into the image are clearly fake, including the stamps, and the red stamp meaning absolutely nothing.

I do not know what it means "original copy", maybe it is an original, maybe copy, maybe it is not a copy of copy, but original of the first copy, I don't know. I do know that such wordings is not printed on any genuine documents.

Conclusion is that Certificate of Ownership is a Fake Document

There is no such thing in business as "certificate of ownership". Such documents are fake and often encountered in dealings with fake gold as promoted by few of the criminals.

Gold is sold and bought in Ghana for cash and with receipts issued by gold dealers. When there is some larger transaction, a contract is used to purchase gold.

Pretentious and self aggrandizing fake certificates of ownerships are nothing but a mud and fog that only naive and wannabe foreign buyers may believe to.

Contact Gold2me.com. There is a simple rule at Gold2me.com: if we can help you, we do, whenever and wherever necessary, and it's the way we've been doing business since 2002, and the only way we know